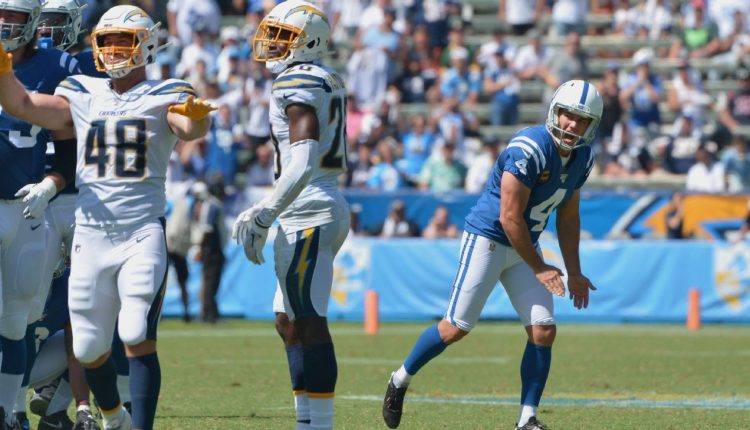 EspnCARSON, Calif. — A horrific kicking performance by Indianapolis Colts kicker Adam Vinatieri took away what should have been a Week 1 victory for Jacoby Brissett as the replacement for Andrew Luck at quarterback.

“I was lousy,” said Vinatieri, who stood at his locker and waited for the media after the game. “Obviously, I did not kick well today and let my team down. They played well. Proud of the guys who fought their butts off and came back. … I feel like that loss is 100% on me. You play a team like the Chargers, who obviously are a good team, can’t come in here and miss three kicks and expect to win. That’s too many points to give away.”

Vinatieri re-signed with the Colts during the offseason because the 46-year-old believes they have a team capable of making a run this season and he feels he can still kick at a high level.

But questions are sure to come up after Sunday’s performance, because going back to last season’s loss to the Kansas City Chiefs in the divisional round of the AFC playoffs, Vinatieri has now missed five kicks — two extra points and three field goals — in the past two games he’s played in. Sunday marked the first time since 1999 that Vinatieri missed three kicks in a game, and it’s the third time it’s happened in his 24-year career.

“If you’re a [general manager], you’d cut me, wouldn’t ya?” Vinatieri asked an ESPN reporter. “I don’t make those decisions. Those are decision for somebody else to make. I’m going to go out there and figure out what I did wrong and try to fix that, and let those decision be made by other people.”

Vinatieri said he’s fine healthwise despite missing time during training camp with a knee injury. He said he won’t be doing a lot of relaxing this week as he tries to regain the touch that allowed him to be the NFL’s leading scorer.

Despite his kicker leaving seven points off the board which would have won the game for the Colts, coach Frank Reich is still supporting Vinatieri.

“He’s the one guy I’m not worried about,” Reich said. “We have the greatest kicker of all time. He didn’t have a good day. There were a lot of guys that didn’t.”

One player who did have a good game was Brissett, who made his first start as Luck’s replacement following Luck’s retirement two weeks ago. Brissett was 21-of-27 for 190 yards and two touchdowns, including the one that capped off a 16-play, 80-yard drive that forced the game into overtime following a two-point conversion.

“I can’t remember too many mistakes that he made,” Reich said. “He was in complete control. He was poised, he knew what he wanted when there were discussions on the sideline about this or that. He knew what he wanted and he made it work. That was a good start for Jacoby.”

About the only thing that didn’t go well for Brissett, who signed a two-year, $30 million contract with the Colts last week, is that he didn’t get chance to cap his performance by leading Indianapolis to the winning score. The Chargers scored a touchdown on the first series in overtime for the victory.