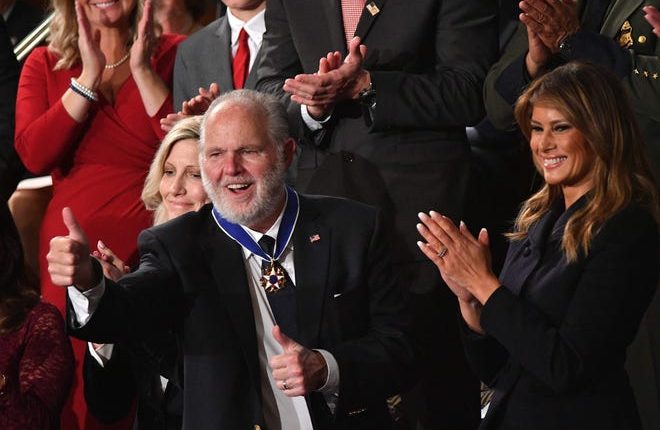 During the State of the Union address on Tuesday, President Donald Trump awarded the Presidential Medal of Freedom to Limbaugh, his longtime friend.

“Almost every American family knows the pain when a loved one is diagnosed with a serious illness,” Trump said during his speech. “Here tonight is a special man, someone beloved by millions of Americans, who just received a stage 4 advanced cancer diagnosis. This is not good news, but what is good news is that he is the greatest fighter and winner that you will ever meet.”

Trump added, “Rush Limbaugh, thank you for your decades of tireless devotion to our country.”

The longtime conservative commentator and radio host announced on his show Monday that he’s undergoing treatment for advanced lung cancer after receiving a diagnosis from two medical institutions in January.

On Tuesday, which doubles as World Cancer Day, Limbaugh attended the State of the Union as one of Trump’s “special guests” and sat in the House gallery next to first lady Melania Trump, who ultimately presented him with the Medal of Freedom in the president’s stead.

“In recognition of all that you have done for our nation, the millions of people a day that you speak to and that you inspire and all of the incredible work that do for charity, I’m proud to announce tonight that you will receive our nation’s highest civilian honor,” Trump said to much applause.

“I will now ask the first lady of the United States to present you with the honor, please,” Trump added while Limbaugh placed his hands over his mouth in shock.

As Melania draped the medal around his neck, a visibly emotional Limbaugh flashed a thumbs-up sign and wiped his eyes before embracing his wife, Kathryn Rogers.

Trump and Limbaugh have been allies since before Trump ran for president, and were seen eating lunch and chatting at Trump’s West Palm Beach golf club just before Christmas.

The two occasionally golf together in Florida: Limbaugh’s show has aired live from his home studio in West Palm Beach since 1996.