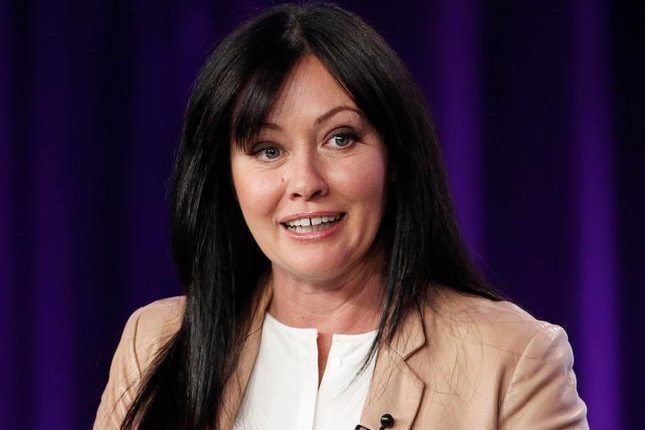 MercurynewsOn Tuesday morning, Shannen Doherty went on ABC’s “Good Morning America” to reveal that her cancer has returned and that it is stage 4, which typically means it has spread to different parts of her body.

But in new court documents filed later in the day, the “Beverly Hills 90210” actress was more direct in what her Stage 4 diagnosis signifies, according to TMZ and Entertainment Tonight. The opening line of the new documents read: “Plaintiff Shannen Doherty is dying of stage 4 terminal cancer.”

The documents are part of Doherty’s lawsuit against State Farm. She filed suit last year, alleging that the insurance company has been dragging its feet in paying out her $1.4 million claim over the “severe” fire and smoke damage her Malibu home sustained in the November 2018 Woolsey Fire, Variety reported.

Doherty’s attorney claims that the company’s intransigence has prevented the “Charmed” actress from moving back in to her home, where she would like to peacefully live out “her remaining years.”

On Good Morning America, Doherty, 48, expressed a desire to get “control of the narrative” over her diagnosis, which she knew would be revealed in the new court filings.

“It’s going to come out in a matter of days or a week that — I’m stage 4. So my cancer came back. And that’s why I’m here,” Doherty told ABC News’ Amy Robach. “I don’t think I’ve processed it. It’s a bitter pill to swallow in a lot of ways.”

Doherty was out of the country when the Woolsey Fire swept through Los Angeles and Ventura counties in early November 2018, burning a total of 96,949 acres, killing three people and destroying 1,643 structures. A number of celebrities lost their homes in the fire, including Miley Cyrus and Liam Hemsowrth, Daryl Hannah and Neil Young and Gerard Butler.

In her lawsuit, Doherty said State Farm failed to respond to her claim in a timely manner and then requested voluminous documents and sought “hyper-technical” reasons to deny coverage for costs associated with her home’s repair and with her need for temporary rental housing, Variety reported.

“This was incredibly distressing to Ms. Doherty, who was and is currently undergoing invasive cancer treatment, including chemo and radiation therapy,” the lawsuit said last year, according to Variety.

Doherty also claimed that she was reluctant to move back home until the repairs had been completed. “She is unable to risk exposure to smoke, smoke-damaged property and other airborne toxins resulting from the Woolsey Fire,” the lawsuit said.

On “Good Morning America,” Doherty said, “I communicated with my insurance company, I called, I got passed around from claims adjuster to claims adjuster, so I ended up suing State Farm.”

“And the result has been one of the most horrific processes I have ever been through,” Doherty added.

In court documents, State Farm said it has paid nearly $1.1 million to clean and repair Doherty’s home and personal property and for temporary housing and furniture rental, ABC News reported. The company also said in court documents that the “plaintiff nevertheless alleges she is entitled to additional benefits under her Homeowner’s Policy.”

“We empathize with Ms. Doherty’s health issues and wish her a full recovery,” State Farm said in a statement to ABC News. “We strongly believe we have upheld our commitment to our customer and have paid what we owe on this claim. We are prepared to defend our position in court.”

Doherty was first diagnosed with breast cancer in 2015, then announced in 2017 that her cancer had gone into remission.

Doherty told Robach she learned that her cancer had returned last year, but she said she kept quiet about it because she wanted to keep working, including on the six-episode “Beverly Hills 90210” reboot, which debuted in August.

Doherty added that she learned her cancer returned shortly before she and the world learned the distressing news in March 2019 that her “90210” co-star Luke Perry, 52, had suffered a fatal stroke.

Doherty said she decided to do the reboot without telling anyone of her diagnosis because she wanted to people to see that she could still work and not be focused on her cancer.

“Like, you know, our life doesn’t end the minute we get that diagnosis,” she said. “We still have some living to do.”

Doherty said she was pressing on with her lawsuit against State Farm because she wanted to take a stand and help other people dealing with insurance companies.

“I think the thing I want to do the most right now is I want to make an impact,” she said. “I want to be remembered for something bigger than just me.”