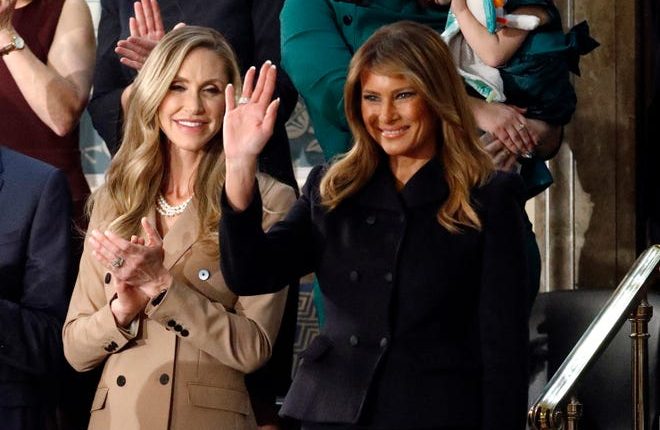 UsatodayDressed in a subdued navy suit, Melania Trump hosted dozens of guests of the administration attending the State of the Union address Tuesday.

Trump’s Dolce & Gabbana dark blazer and matching skirt stood in stark contrast to the Democratic congresswomen who wore white to honor the women’s suffrage movement that led to the ratification of the 19th Amendment in 1920, which granted women the right to vote.

After being introduced to much applause, the first lady shook hands with Rush Limbaugh, the conservative radio host who announced his diagnosis of advanced lung cancer on Monday, before taking her seat directly next to him in the House gallery.

During President Donald Trump’s address, she presented a visibly emotional Limbaugh with the Presidential Medal of Freedom.

Limbaugh was one of the Trumps’ special guests at the address, which touched on economic development, school choice, health care, immigration and the military.

As in past administrations, the White House tried to connect with audiences watching the speech at home by highlighting guests’ stories. .

According to the White House, the guests were to include Jody Jones of Farmersville, California, whose brother Rocky was killed in 2018 by a migrant in the country illegally, and Kelli Hake and her 1-year-old son, Gage, of Stillwater, Oklahoma, whose husband, Army Staff Sergeant Christopher Hake, was killed in Iraq by a roadside bomb supplied by Qasem Soleimani, the Iranian leader killed by a U.S. drone strike last month.

Trump’s special guests were to include Robin and Ellie Schneider of Kansas City, Missouri. The White House said that “Ellie was born at just 21 weeks and six days. She is one of the youngest babies to survive in the United States.”

Another scheduled guest was Paul Morrow, an Army veteran from Montgomery, Alabama, who started a contracting business and is building a new concrete plant under the administration’s Opportunity Zone program, which offers tax incentives to invest in distressed areas.

Before the State of the Union address began, the Trump family showed solidarity, with Ivanka Trump tweeting a “BTS” photo of herself, husband Jared Kushner and her siblings Erik, Tiffany and Donald Trump Jr.

#BTS State of the Union #SOTU 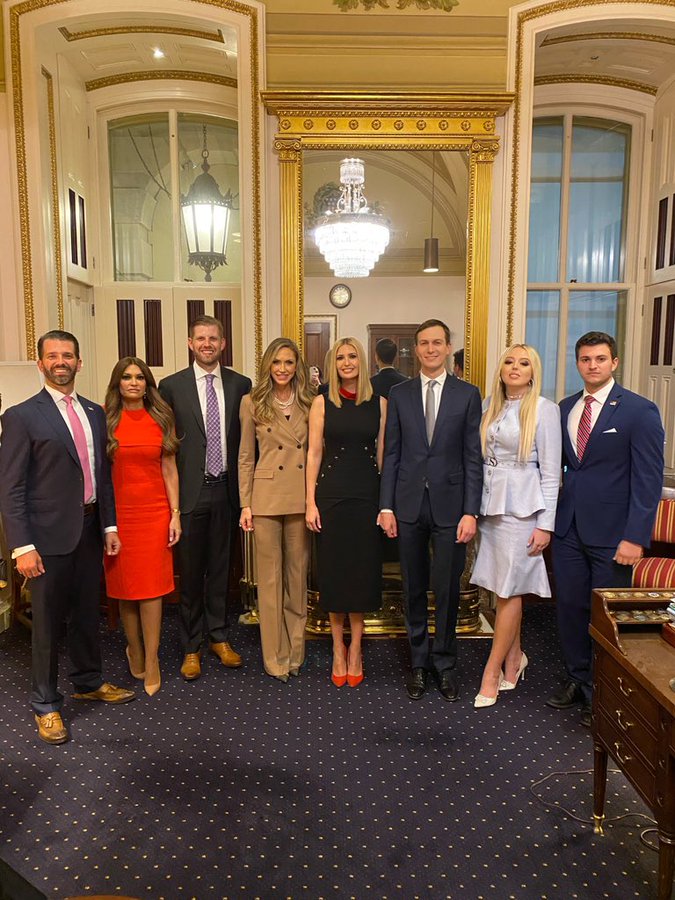 9,228 people are talking about this

President Trump opted for a navy tuxedo with a red tie and American flag pin on his lapel for his speech. He thanked his wife for her “extraordinary love and profound care for America’s children” and acknowledged her work on her “Be Best” initiative.

The first lady has been more low-key than ever in the past few months of impeachment proceedings, saying nothing publicly and glimpsed only occasionally at President Trump’s side or going up and down Air Force One stairs as they travel.

But she is expected to take a higher profile in coming weeks, headlining spring fundraisers for her husband’s reelection campaign, according to Politico, citing invitations for the two events in March in Beverly Hills and at the Trumps’ Mar-a-Lago club.

The Slovenia-born first lady, 49, is not especially political and never delivers stem-winding political speeches the way the president does. During the 2016 campaign she was rarely seen at rallies; since she began living full-time in the White House in June 2017, she has been the most reserved first lady since Bess Truman.

But she is popular with the Trump base and may be moving toward a more public role as a campaigner for the 2020 race. So far, neither the White House nor the Trump campaign has confirmed her plans.

Meanwhile, on Monday, she announced the annual White House Easter Egg Roll would take place April 13. Free tickets will be distributed through an online lottery opening Feb. 18 at 10 a.m. EST, and closing Feb. 24 at 10 a.m. EST.

She tweeted a picture of colored eggs.

“We are excited that the 2020 #WhiteHouse Easter Egg Roll is quickly approaching. Learn more about the fun-filled event and see this year’s beautiful Easter Egg Collection,” she wrote in the post.

We are excited that the 2020 #WhiteHouse Easter Egg Roll is quickly approaching. Learn more about the fun-filled event and see this year’s beautiful Easter Egg Collection: http://shop.whitehousehistory.org 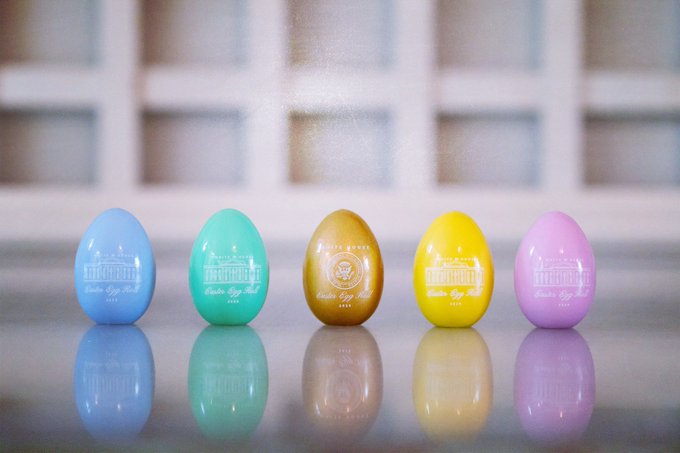 2,633 people are talking about this

The Trumps were glimpsed in pictures and in social media at their annual Super Bowl party at Mar-a-Lago, where they spent the weekend.

She wore a white jersey dress by Herve Pierre with navy-and-red trim at the waist and cuffs and donned a navy wrap when she, the president and their son, Barron, 13, returned to the White House Sunday night.

On Saturday she posted another tweet taking some credit for progress in the anti-drug-overdose effort through her “Be Best” initiative, of which opioid abuse is a major component.

According to the Centers for Disease Control and Prevention, deaths from drug overdoses dropped slightly in 2018, a first in nearly two decades as an opioid epidemic continues to batter many communities. That dip in turn helped slightly bump up life expectancy from 78.6 years in 2017 to 78.7 years in 2018.

Trump said life expectancy has increased under her husband’s administration.

“For the first time in 29 years, drug overdose deaths have dropped by 4.1% and life expectancy has increased by 4 years! Proud of this administration for ensuring a safer and healthier future for our nations children. #BeBest,” she tweeted.

For the first time in 29 years, drug overdose deaths have dropped by 4.1% and life expectancy has increased by 4 years! Proud of this administration for ensuring a safer and healthier future for our nations children. #BeBest https://www.whitehouse.gov/briefings-statements/statements-decline-drug-overdose-deaths/ …

In recent days, Trump has tweeted about the start of Black History Month, about Holocaust Remembrance Day and about the death of NBA superstar Kobe Bryant, his teen daughter and seven other people in a helicopter crash in Los Angeles County last week.

It is a great honor to serve the people of this incredible country. 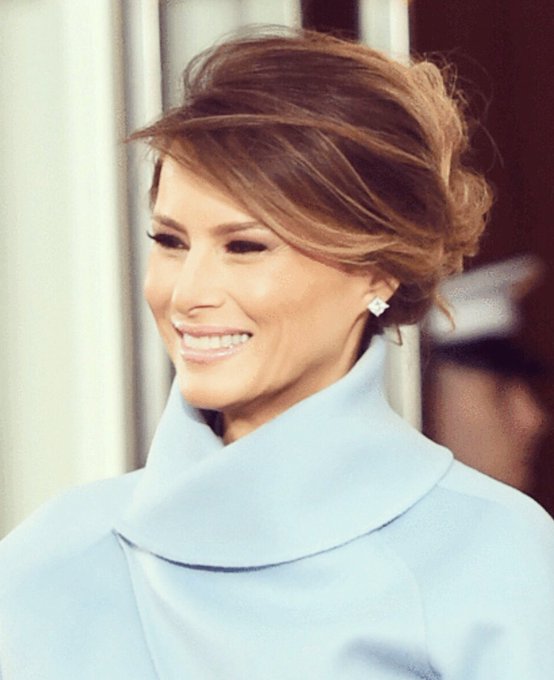 On Jan. 20, the third anniversary of her husband’s inauguration, she tweeted about the honor of serving the country.