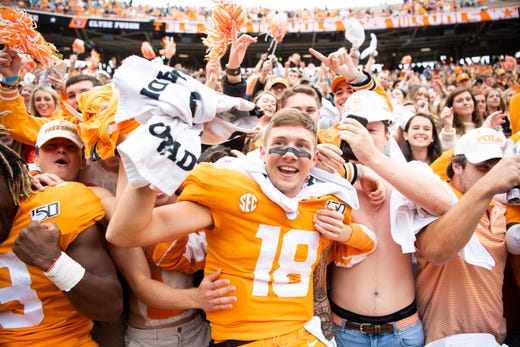 knoxnews Jeremy Pruitt hypothesized this week that Jarrett Guarantano’s time would come again. He probably didn’t know when he said it that it would come so soon.

Guarantano, Tennessee’s starting quarterback turned backup, replaced an injured Brian Maurer in the second quarter Saturday and helped the Vols upset Mississippi State 20-10 in front of an announced crowd of 85,462 at Neyland Stadium.

Tennessee’s defense deserved much of the credit for limiting MSU to a season-low 267 yards.

Tennessee (2-4, 1-2 SEC) beat a Football Bowl Subdivision opponent for the first time this season in a game that was pivotal to the Vols’ hopes of rallying for a bowl bid.

Maurer threw two interceptions in the red zone during the first half.

Three plays before his second interception, Maurer landed on his head at the end of a 13-yard run. He was evaluated for an injury after the drive, and Guarantano replaced him on the ensuing possession.

Maurer did not return. Pruitt said afterward that Maurer suffered a concussion. He finished 4-of-7 passing for 61 yards.

Vols defense rises to the challenge

Pruitt said Wednesday that Bulldogs running back Kylin Hill might be as good as Georgia star D’Andre Swift. Perhaps, but MSU’s offensive line is no comparison to Georgia’s.

The Vols defensive line delivered their best performance of the season in limiting MSU to 121 rushing yards on 37 carries. Hill entered the day leading the SEC in rushing. He finished with 13 yards on 11 carries.

The only negatives for UT’s defense were that safety Trevon Flowers exited with a broken leg and linebacker Henry To’o To’o was ejected in the second half for targeting, meaning he must sit out the first half of next week’s game against Alabama.

Tennessee featured a conservative approach with Guarantano as the quarterback. It ran the ball on nine consecutive plays before Guarantano attempted his first pass during his third drive.

Guarantano was effective when needed, though. He completed 6 of 7 passes for 106 yards. His 41-yard third-down completion to Ramel Keyton set up Brent Cimaglia’s second field goal for a 13-3 lead.

Guarantano’s 9-yard swing pass to Tim Jordan on third-and-6 extended a drive that ended with his 39-yard touchdown pass to Tyler Byrd to seal the victory after MSU had cut the lead to 13-10.

Byrd caught a short pass, turned toward the sideline and outraced everyone to cap a 91-yard scoring drive. Byrd matched a career high with three receptions for 56 yards.

The Bulldogs have 10 players who must serve a multi-game suspension this season because a tutor completed coursework for them in 2018.

MSU coach Joe Moorhead is allowed to select which games to sit the suspended players. They do not have to sit out the same games or serve the suspension consecutively.

All of the suspended players played Saturday, indicating Moorhead considered this a winnable game for the Bulldogs. Saturday marked the second time this season that the Bulldogs have not sat any players for suspension reasons.

Stevens wasn’t sharp. He was 6-of-11 passing for 67 yards with two interceptions.