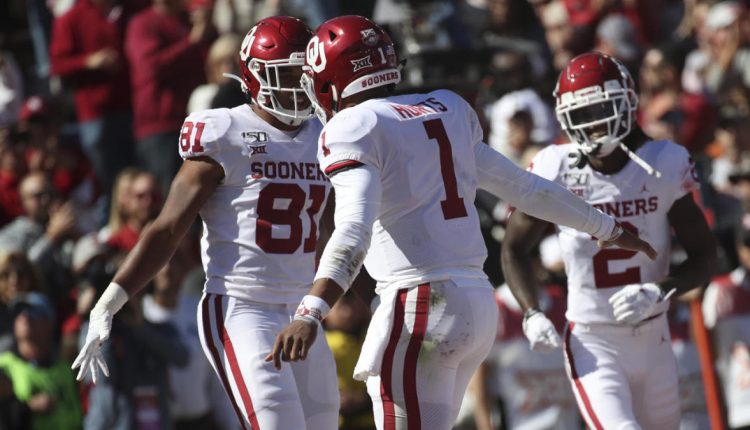 DALLAS — It may not have been the offensive explosion that is sometimes delivered in the Red River Showdown, but No. 6 Oklahoma’s 34-27 win over No. 11 Texas on Saturday had a little bit of everything, including defense. Yes, defense.

The Sooners (6-0, 3-0 Big 12) led just 10-3 at halftime, but were able to pull away late and their much-maligned defense held the Longhorns to just 310 yards — a chunk of which came in garbage time.

Oklahoma had a far better day on the ground than Texas (4-2, 2-1) with Sooners quarterback Jalen Hurts and running back Kennedy Brooks, who combined for 192 of the OU’s 232 yards on the ground. Receiver CeeDee Lamb was a game-changer with three touchdowns and 171 receiving yards. It wasn’t the cleanest effort from the OU offense — they had two red-zone turnovers — but the big plays were there in the second half.

Here’s what we learned from Saturday’s game:

Oklahoma’s defense has been a laughing stock for the past few years to the point where an entire conference bears the brunt of the joke. And, to be sure, the Sooners deserved the flak. Oklahoma managed to win 11 games and make a College Football Playoff appearance a season ago despite practically zero margin for error. Consider that margin widened this season with the addition of defensive coordinator Alex Grinch. The difference in the confidence with which this defense plays is night and day compared to last season — and, by the way, this week will mark the one-year anniversary since former defensive coordinator Mike Stoops was let go.

Oklahoma allowed just 310 yards of offense against Texas. Linebacker Kenneth Murray was the player of the game, at least on defense, with five tackles, two tackles for loss, and a sack.. Grinch dialed up all kinds of blitzes on third down for nine sacks. It’s not a shut-down unit or a finished product yet, but it’s good enough to win games so that the offense doesn’t have to.

Speaking of offense, let’s take the spotlight a little bit off of OU quarterback Jalen Hurts (who threw for three touchdowns and ran for another score) and focus on receiver CeeDee Lamb. If Murray was the best defensive player in the Cotton Bowl on Saturday, Lamb was the best offensive player with 10 grabs for 171 yards and three touchdowns. You could even say he was the individual player who affected the outcome of the game the most. His three scores were a result of great play calls, but also required him to make some outstanding individual plays in the open field to avoid tackles. Lamb’s shiftiness looks so effortless and he’s a tougher guy to tackle than you’d expect for a guy his size.

With Marquise Brown in the NFL, this is now Lamb’s chance to shine as the No. 1 pass-catcher. He only had 18 grabs coming into Saturday, but on a big stage he showed he could take over a game from a position other than quarterback.

And that’s not even mentioning Kennedy Brooks. The running back was a big-play threat every time he touched the ball with 61 yards on the ground on just 10 carries. Hurts was the leading rusher with 131 yards, but Brooks was a nice complement on the perimeter.

Texas was limited on offense

Again, this comes back to how well Oklahoma played on defense, but the lack of a running game really showed once Ehlinger and leading wideout Devin Duvernay were taken away. Ehlinger didn’t have any room and finished with -9 yards rushing (sacks included) on 23 attempts. No other player had more than eight carries. Roschon Johnson was the leading Longhorn rusher with 95 yards, but most of them came on two big carries. Otherwise, the ground game was non-existent.

And Ehlinger didn’t have any windows to throw to down the field. Collin Johnson had a nice game with 82 yards receiving, but wasn’t able to get into the end zone. In all, Texas averaged just 4.2 yards per play. With the depth problems Texas had all season, it seemed like only a matter of time before it showed up in a big way.

There is a blueprint to beating Oklahoma

As it turns out, the Sooners’ offense is not invincible. That was going to come to light at some point this season, but Texas did a good job of exposing some of the cracks in this otherwise well-oiled machine. While the Horns gave up plenty of yards in between the 20-yard lines, they did a much better job in the red zone.

In all, the Sooners had six trips inside the 20, but came away with only three points in the first three trips before scoring two late touchdowns. That goes to show you can’t stop this offense forever, but it’s not like Texas didn’t give itself a chance by mitigating the damage. Hurts’ two turnovers — one fumble, one interception — and another near interception were pretty bad and put a slight damper on what has been an otherwise stellar season so far. If you can pressure Hurts up the middle and keep your eyes on him on the back end, you can force him into some throws he shouldn’t make. Yes, Oklahoma is the best team in the Big 12, perhaps by a sizable margin, but after Saturday’s game, it’s clear they’re not unbeatable. Someone may be able to trip them up before the season is over.

CBS Sports was with you the entire way updating this story with the latest scores, highlights and analysis from Oklahoma vs. Texas, which can be viewed live on Fox or fuboTV (Try for free). If you are unable to view the live updates below, please click here.