A detailed look at the early impact from the latest Google core update.

Searchengineland The Google September 2019 core update should be just about done rolling out by now, and we wanted to share some early analysis on this latest update. We have data from a number of SEO tool providers, community reaction and Google’s advice on this update.

What is a Google core update? A Google core update is when Google adjusts its core search ranking algorithm with the goal of returning more relevant and useful search results to the searcher. Google does these updates every quarter or so, and for the past few updates, Google has confirmed them.

Rankings change. With any Google update, a core update, quality update or even some user interface updates, the search results change. Some result in sites ranking higher for their prime keywords, others may see a drop in their positions, while others may see no change. Also, click-through rates may be impacted by updates, and you may notice more or less traffic after any of these updates. Google made over 3,200 changes last year alone, but core search algorithm changes happen only several times per year, with big core updates happening around once a quarter.

Data on the Sept. 2019 Core Update. We have data from various SEO toolset providers. In aggregate, the data show that this September update was not as strong or impactful as the June core update, which we had data on as well. Overall, the September core update appears to have had a stronger impact on the YMYL, your money – your life, category.

RankRanger: Let’s start with RankRanger, where the company told us: “as is typical with these core update, the Health and Finance niches took the brunt of it.”

“The volatility of increases seen at positions 1 – 3 during the June update were substantially higher than what I saw with this [September] update,” the company added.

Here is a chart showing the volatility by sector:

re is a chart showing the volatility by sector:

Here is a chart comparing June to September core updates:

Sistrix: Next, here is Sistrix.com which published data around this update Friday morning. The company told us its “initial impressions are that medical, media and travel domains are included (from a global perspective.)”

“In the USA there are some clear winners. As for losers, there are no significant examples to share at this time,” it added. Looking at the data, the September core update shows less of an impact compared to the June core update.

The DailyMail, which got hit hard in the June core update, saw a nice recovery, according to Sistrix:

Other winners, according to Sistrix, were biologydictionary.net, autoguide.com and additioncenter.com. Those are currently the four biggest winners of this update according to its data.

“Volatility in some categories is higher, e.g. News and Sports, but these categories are likely to have higher changes throughout the day,” the company added. The company said it did not see a strong pattern for winners and losers with this update.

Here is the volatility broken down by category or section, notice news, sports and arts/entertainment were the most impacted. But that isn’t uncommon, as SEMRush said above:

The community. The SEO community has been very active watching and reacting to this update, like all updates. Here are some comments from the community, including what I covered on my personal blog.

Here is a poll I asked on Twitter about this update:

Here are tweets from the community responding to this poll:

Any Boat@AnyBoat1
Replying to @rustybrick

Of all of the google updates this is the first time we have taken a hit. Specifically the small e-commerce section selling New Year’s Eve tickets.

See Any Boat’s other Tweets

Had decent gains from both June and March and almost every update in the last couple years this one is a bit of hit for me.

Wondering if I’m the only one seeing this anomaly in Google Analytics after Google’s September Core update – 7 day comparison shows a drop that simply doesn’t exist in any other range / report:

Looking rosy over here 🙂 The June update hit us hard so this is beautiful to see. Only changes since June is needed to up my anti-depressants for the first time in 15 years. 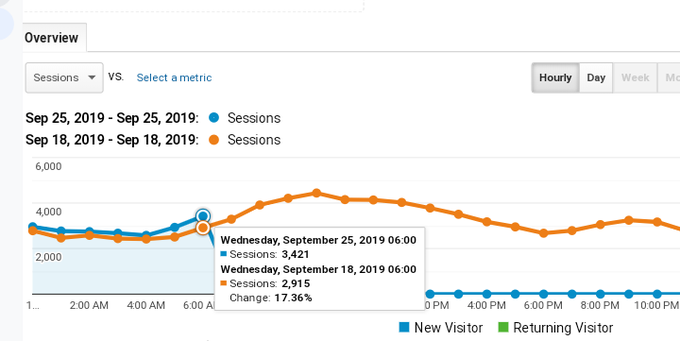 I’m seeing around 40% reduction starting yesterday. This is a healthcare-related site that struggled after the March 2019 Core Update, but after changes were made was beginning to show signs of recovery up until yesterday.

It is still early. The rollout may be finishing up very soon, but this is all early data and things may still change over the next couple of days. So far, it appears this update was not as big as the previous update. So keep an eye on your traffic, keep making your web site better, and keep working on driving traffic and conversions on your site.

Everything to Know About Brooke Nevils, the Emmy-Nominated Producer Accusing Matt Lauer of Rape