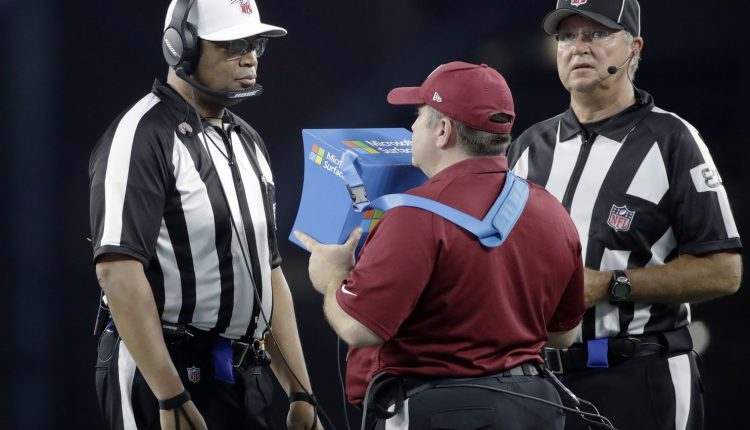 WashingtonpostThe NFL rule book received one major change in the 2019 offseason: Pass interference is now subject to instant replay review, both when it’s flagged on the field and when it isn’t. Owners ratified the change in March after the infamous officiating blunder in the NFC championship game in January. Here’s what you need to know about the new rule, and how it will work

What, exactly, is the new rule?

Under the rule, both pass interference calls and non-calls are subject to review by instant replay and can be overturned. Any interference-related replay reviews fall under the coaches’ challenge system in the first 28 minutes of each half. In the final two minutes of each half, such a review must be initiated by the replay official in the press boxes at NFL stadiums.

Each team will continue to have two replay challenges per game, plus a third if its first two challenges were both correct. As with other replay reviews, an interference-related review is conducted by the NFL’s officiating department in New York, overseen by league officiating czar Al Riveron, in consultation with that game’s referee on the field. There still are automatic replay reviews of all scoring plays and plays resulting in a turnover, which means interference calls and non-calls are automatically reviewable on those plays, as well.

Why did the NFL make the change?

The outcry over the missed pass interference call (not to mention a missed call of an illegal hit) against the Los Angeles Rams in the NFC title game led to the owners’ vote in March. As the Saints drove toward a potential game-winning score, the Rams’ Nickell Robey-Coleman plowed into the Saints’ Tommylee Lewis late in the fourth quarter, without a call being made. The Rams eventually prevailed in overtime and they, not the Saints, advanced to the Super Bowl.

[The NFL changed its replay rules after the Saints-Rams fiasco. Now comes the hard part.]

The replay change was a major shift for the NFL. The rulemaking competition committee long had been opposed to making judgment calls by the on-field officials, like interference, subject to replay scrutiny. Committee members and many owners were also wary of allowing replay to “put a flag on the field,” or assess a penalty not called by the on-field officials. But the Rams-Saints officiating gaffe was a major blunder and coaches, owners and league leaders felt that something had to be done. Owners approved the new measure for one year only, so the change will be reconsidered next offseason

How did the new rule work during the preseason?

There was one unsuccessful interference-related replay challenge during Thursday night’s NFL regular season opener in Chicago, made by Packers Coach Matt LaFleur. He challenged an interference non-call, contending that Bears wide receiver Taylor Gabriel pushed off before making a catch and should have been called for offensive pass interference. But after replays showed that it was the lightest of pushes by Gabriel, the on-field non-call was allowed to stand.

What are the potential problems?

There are a number of potential issues, in the minds of some skeptics. The new system puts very subjective calls into the hands of Riveron. He is supposed to limit himself to fixing obvious officiating mistakes. But some worry that he will begin changing calls that amount to tossups and the NFL will have a repeat of the controversy over his replay rulings on catch-or-no-catch plays a few years ago.

There also are concerns about the pace of games being slowed and about how Hail Mary plays, with so much jostling by players grouped together in the end zone, will be officiated and reviewed. Some wonder how fans and viewers will react if, say, a touchdown catch is nullified by offensive pass interference on an illegal pick not called by the on-field officials and not noticed initially by anyone else. And there are observers who contend that the NFL overreacted to a one-in-a-million officiating mistake and that this new system won’t go well.

But the flip side is easy to articulate: Replay was always intended to prevent a huge officiating mistake from determining the outcome of a game, so why have it at all if it can’t remedy what happened with the Rams-Saints fiasco?

If this does go well, it’s possible that the use of replay will be expanded in the future. Perhaps the proposal made in the past by Patriots Coach Bill Belichick and others — to make all calls and non-calls subject to potential replay review, under the coaches’ challenge system — eventually could be enacted. At the very least, the next step probably would be to make calls and non-calls of illegal hits reviewable.

WATCH: Fox’s Ed Henry makes emotional return to network after donating portion of his liver to his sister