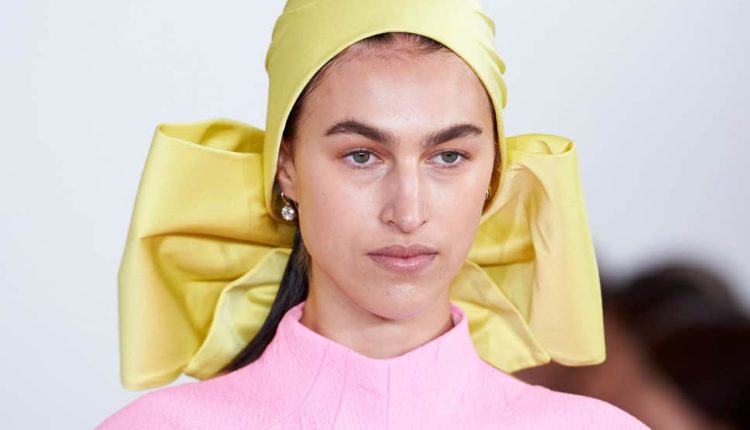 independent | The penultimate day of London Fashion Week is a big one because, before the style-set bid adieu for one more season, the busiest, and arguably most anticipated, day awaits them.

Today, big-gun editors flocked to see Riccardo Tisci’s hotly anticipated collection for Burberry, while other members of the establishment – including Roksanda, Erdem, Christopher Kane and Emilia Wickstead – also drew in the crowds.

Elsewhere, a handful of emerging talents and underground brands such as TOGA, Rejina Pyo and Edeline Lee offered a mix of considered collections and presentations which catered for a whole new generation of fashion fans.

Here, we take a look at all the best bits from day four of London Fashion Week.

A designer that’s curated an instantly recognisable design aesthetic in the decade since she launched her eponymous label, Roksanda Ilincic has become synonymous with stand-out colour blocking and sculptural shapes, and this season was no different.

The Serbian designer’s background in architecture and applied arts is often cited as forming the foundation of her designs. And so, it made sense that she chose to showcase this season’s collection within the Serpentine Pavilion – a building which this year has been designed by Mexican architect Frida Escobedo, and features walls made of concrete roofing tiles, a curved, mirrored ceiling and a shallow, triangular pool of water.

Sophisticated and playful, yet entirely effortless, the collection was brimming with impactful silhouettes, vivid colours and surprising textures for a contemporary take on femininity.

This was a lesson in how to execute a modern and more feminine version of power dressing.

Easily one of the most anticipated shows of the season, half-British, half-Turkish designer Erdem Moralioglu chose to reveal his collection in the National Portrait Gallery; a location which only served to add to the grandeur of it all.

For spring/summer 2019, he cited the freedom of self-expression as his starting point, making particular reference to Frederick Park and Ernest Boulton, two men who were arrested in 1870 while dressed as their female alter egos, Fanny and Stella.

Just two figures in a diverse crowd of men and women at the time exploring beyond the prescribed boundaries of sex, it was the idea of dressing up or down to explore one’s individual identity that inspired this dimly lit show.

In this instance, the opulence and glamour of Erdem’s aesthetic resurfaced through sumptuous flocked fabrics, long trains that dragged down the corridors and layers upon layers of lace.

Never one to disappoint, it was, once again, Erdem’s poignant message combined with his penchant for moments of melancholy that made this a standout show.

A brand that doesn’t take itself too seriously, Mother of Pearl has a fun, playful spirit about it, much of which is thanks to its creative director Amy Powney. A designer who often draws references from her childhood in the North of England and is inspired by the strength of the women that surround her, Powney aims to celebrate femininity and individuality with effortless fashion.

The brand’s latest offering looks to the Early Netherlandish painters for inspiration, specifically the work of Jan van Eyck. In this instance, rich and regal tones like emerald green and burnt orange set a decadent mood while light-hearted prints – think golden gilded lions and vibrant blooms – crystallise the brands aesthetic.

In contrast, Powney sought inspiration from the bold and forward-thinking haute couture of the 1920s when it came to silhouettes. Here, puffball sleeves, cocoon cuts, cascades of ruching and heeled mules decorated with larger-than-life bows were incorporated as a way of encouraging women to dress for themselves and their love of fashion.

A lesson in tomboyish femininity from TOGA

One of Japan’s most preeminent brands, TOGA is the brainchild of former costume designer and stylist, Yasuko Furuta. A woman with an avant-garde vision, her collections have become synonymous with statement prints and a tomboyish femininity that combines elements of contemporary Western style and Japanese design.

This season, the experimental world of TOGA began with a cryptically titled show called “Sport, Air, Scrunched”, which, as it turns out, was a treasure trove of striking pieces in modern shapes and multi-layered silhouettes.

With a series of looks born to be worn after dark, the sporty element was replaced with satin gowns, cinched-in waists, puffball shoulders and the most incredibly intricate frills decorating everything from sharply tailored blazers to languid trenches.

It was cool, elegant and multifaceted. For us though, the standout pieces were those that offered tomboyish femininity, specifically the blazer-meets-bomber jackets that came trimmed with tightly-packed ruffle trims

?Wait, What Did Callahan Just Pull Out of His Pants on Dating

Should You Mix Apple Cider Vinegar and Honey?

Working from home will be the ‘new norm’, Dubai Future Foundation predicts