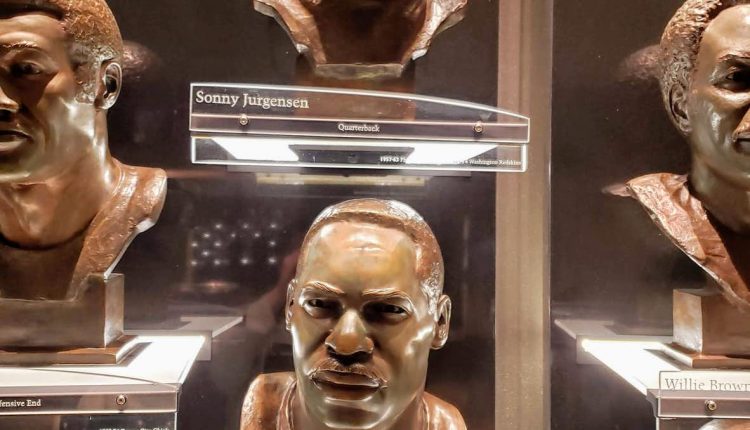 Sports Illustrated- The Redskins lost an all-time great Sunday, as Hall of Famer Bobby Mitchell died at the age of 84.

Having played his college ball at Illinois, Mitchell was selected in the seventh round of the 1958 draft by the Cleveland Browns and after four successful seasons, traded to the Washington Redskins in 1962.

Cleveland traded their first-round selection Leroy Jackson and Bobby Mitchell to the Redskins in exchange for Heisman Trophy-winning running back Ernie Davis out of Syracuse, the No. 1 pick in the 1962 draft.

Sadly the Browns never enjoyed Jim Brown and Davis in the same backfield.

Even more, Davis never played pro football, as he was found to have leukemia later in 1962 and died the following May.

In his seven seasons in the Burgundy and Gold, Mitchell caught 393 passes for 6,492 yards and 49 TD; averaging an impressive 16.3 yards per reception and 66.2 yards receiving per game.

Mitchell consequently was voted into the NFL Hall of Fame in the class of 1983 along with former Redskins’ teammate and quarterback Sonny Jurgensen.

Also of note, former Redskins teammate and fellow wide receiver Charley Taylor was also a finalist on that 1983 Hall of Fame ballot, but fell short of induction.

Taylor however was inducted into the Hall of Fame the following year (1984).

Mitchell was brought to Washington when Redskins’ owner George Preston Marshall was the last NFL owner to integrate his team.

Mitchell was the first black player who was a great Redskin; a superstar.

When Mitchell arrived in 1962, he was immediately a big-play performer for the Redskins.

In fact, in his very first game as a Washington Redskin (vs Dallas Cowboys), Mitchell scored three touchdowns.

Mitchell was on the receiving end of a 6-yard pass from Norm Snead in the first quarter.

In the second half, Mitchell returned a kickoff 92 yards for a touchdown.

Trailing 35-21 in the final quarter the Redskins scored twice to tie the game (35-35) including a Snead to Mitchell 81-yard touchdown pass.

Mitchell was a game-breaker for the Redskins collecting an NFL-leading 72 catches for 1,384 receiving yards in 1962, both Washington Redskins records, including 11 touchdown receptions.

Number 49 also led the NFL with 10 receiving touchdowns in 1964 his first of four seasons with Sonny Jurgensen as his quarterback.

1968 being Mitchell’s last season, Vince Lombardi had become head coach in 1969 and hired Mitchell to be a Redskins scout.

Mitchell was with the Redskins until 2002, last serving as their Assistant General Manager.

The son of Rev Albert and Avis Mitchell, he was one of eight children.

He was a four-sport athlete in high school in Langston, AR, and later an All-Big Ten half back at Illinois, also running the hurdles and sprints in Track and Field.

He is survived by his wife, Gwen and two children Robert Jr, and Terri.