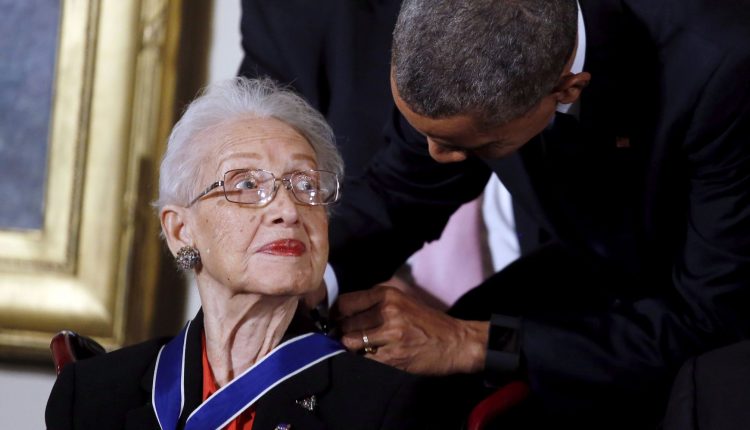 Katherine Johnson, one of the history-making, barrier-breaking NASA mathematicians depicted in “Hidden Figures,” died Monday, the administrator of NASA said.

“Johnson helped our nation enlarge the frontiers of space even as she made huge strides that also opened doors for women and people of color in the universal human quest to explore space,” NASA Administrator Jim Bridenstine said in a statement.

In a tweet, he called Johnson “an American hero.”

Johnson was portrayed by Taraji P. Henson in the Oscar-nominated 2016 film about trailblazing black women whose work at NASA was integral during the space race.

The film also stars Octavia Spencer as the mathematician Dorothy Vaughan and Janelle Monáe as the engineer Mary Jackson.

The work of the women altered the country’s history but their names were largely unknown until the movie received acclaim. Jackson died in 2005, and Vaughan died in 2008.

Johnson began working at NASA’s predecessor, the National Advisory Committee for Aeronautics (NACA) in 1953 at the Langley Laboratory in Virginia.

She said her greatest contribution to space exploration was making “the calculations that helped sync Project Apollo’s Lunar Lander with the moon-orbiting Command and Service Module.” In other words, helping to put men on the moon in 1969.

She was also the first woman in the Flight Research Division to receive credit as an author of a research report for her work with Ted Skopinski on detailing the equations describing an orbital spaceflight.

She did trajectory analysis for Alan Shepard’s 1961 mission Freedom 7, which was America’s first human spaceflight, according to NASA.

She was also known for work that greatly contributed to the first American orbital spaceflight, piloted by John Glenn.

The 1962 flight required the construction of a “worldwide communications network” linking tracking stations around the world to computers in Washington, D.C., Cape Canaveral and Bermuda.

But astronauts weren’t keen on “putting their lives in the care of the electronic calculating machines, which were prone to hiccups and blackouts,” according to NASA. So Glenn asked engineers to “get the girl,” referring to Johnson, to run the computer equations by hand. “If she says they’re good,’” Johnson remembered Glenn saying, “then I’m ready to go.”

“Glenn’s flight was a success, and marked a turning point in the competition between the United States and the Soviet Union in space,” NASA says.