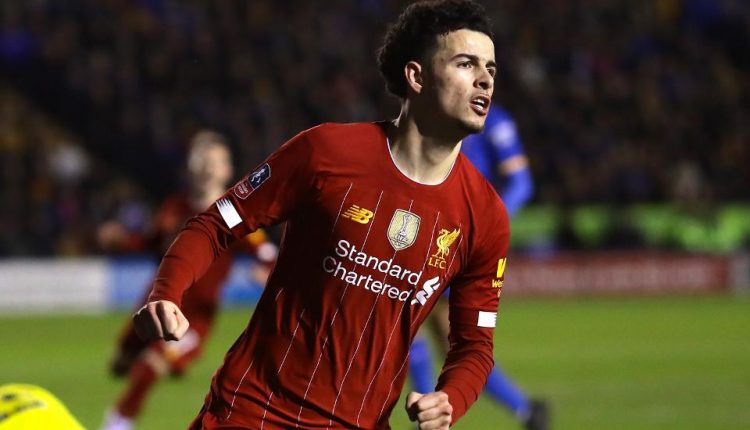 Liverpool manager Jürgen Klopp fielded a mixture of youth players and first-teamers just back from injury in the first game at Montgomery Waters Meadow last month, but the 2-2 draw meant the game will be decided in this replay at Anfield.

With Klopp deciding to stick to the first team’s original plan of taking the mid-season break, as directed to do so by the Premier League, the club’s U23 side and their manager Neil Critchley will be tasked with facing the Shrews in this second game.

It provides an opportunity for the young players, several of whom, including Jones, are themselves on the brink of breaking into the senior setup.

Pedro Chirivella captained the youth side which deputized against Aston Villa in the Carabao Cup for the seniors who were at the Club World Cup in Qatar, but Critchley revealed prior to the game that the young Scouser could wear the armband on this occasion.

“Curtis has been our captain for the U23s this season, but wasn’t captain in the Aston Villa game because he was away at the Club World Cup,” said Critchley.

“So I shall toss the coin and see which one it lands on. Would he be the club’s youngest-ever captain? Well, he might give me a double-headed coin to flick then.”

Jones scored the only goal as a young Liverpool side knocked out Everton in the previous round of the FA Cup, after which Klopp revealed that something unusual would have to happen for the youngster to not become a first-team player in the future.

Critchley agrees, but also thinks Jones will need to continue his improvement in order to reach the top with the club.

“He is a young player who wants to prove himself, I don’t see a problem with that,” added Critchley.

“He has belief in himself and he’ll learn through experience when to show that on the pitch and when not to show it. He couldn’t be learning off better people here, the senior players around him and the staff.

“He is who he is. We are here to support him and guide him. You have to let Curtis have a certain amount of freedom in the way he plays because that’s when he’s at his best, but he has to do some of the other things in his game otherwise he won’t be part of the team.”

Toxteth-born Jones has captained Liverpool’s youth teams in the past, but taking the armband in a first team match at Anfield is something entirely different.

When asked whether the 19-year-old has the mentality and confidence to be given such responsibility at a club as big and successful as Liverpool currently are, Critchley referenced the Everton game.

“I think he gave a good answer to that in the game against Everton! Self-belief is probably not one of his weaknesses,” he said.

“He’ll be looking forward to the game, no doubt about that. A few of the other players have had some experience of these types of games this season—Arsenal, Everton, Aston Villa—so we’re going to have that little bit of experience in and around the team.

“Even though you’re talking about experience when Curtis has only just turned 19 and we’re going to have players who are eligible in the U18 team. People say it’s an U23 team but we’re not, we’re going to be [mostly] U19s, U20s at best.

“A lot of people speak about young players not getting an opportunity in this country. They are going to get an opportunity tomorrow night and they have already had an opportunity this season because that’s what the manager does. I can’t wait.”