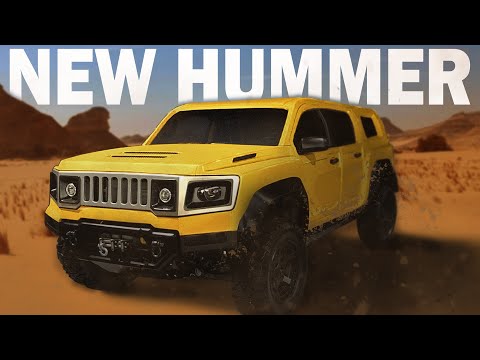 General Motors recently confirmed it’s working on an all-electric pickup for 2021. Earlier reports suggested this EV truck would also relaunch GM’s defunct Hummer brand, and as it turns out, those rumors were correct. Sort of.

GM officially announced the new Hummer EV on Thursday, but instead of being sold under a reborn brand, it’ll be part of GMC’s lineup. The GMC Hummer EV (yes, that’s the real name) will be revealed on May 20, following an initial tease in a 30-second Super Bowl ad spot.

Ahead of its big debut, the Hummer EV is already throwing down some impressive numbers. According to a statement, GMC says the electric pickup truck will produce 1,000 horsepower and 11,500 pound-feet of torque and be able to accelerate from 0 to 60 mph in 3 seconds.

Real quick, though, a word about that torque number. We believe GMC is referring to axle torque, or wheel torque, which is different from the power being produced from the electric motors themselves. We recently experienced this disparity when BMW let us test an electric prototype that it described as having 7,357 lb-ft of torque, but in the terms we’re familiar with was making 848 lb-ft. (Jason Fenske from Engineering Explained has a great video that details the difference.) Yes, the 11,500 lb-ft number is technically correct from an engineering standpoint, but it’s not the measurement most commonly used. A GMC official told Roadshow the final, SAE-certified number will be released closer to the truck’s on-sale date.

In the ad, we get a very clear look at the Hummer EV’s front end, which we think looks supercool. Naturally, the grille lights up, and vertical lights do a dance before the H-shaped LED headlights fully illuminate — perhaps these indicate the level of charge when the truck is plugged in. You can see the front fascia in action in the Super Bowl commercial.

The only other telling detail in the teaser photo is at the very top: three orange marker lights. These federally mandated lights are required for vehicles over 80 inches wide. That’s why you see lights like this on the Ford F-150 Raptor, as well as big, heavy-duty trucks.

Obviously, with an announcement like this, comparisons to the upcoming Tesla Cybertruck are certainly warranted. (Be sure to read our spec comparison story for all the details.) The GMC Hummer EV will compete against a growing crop of electric trucks, including the Bollinger S2 and Rivian R1T. Ford has confirmed it’s working on an electric version of its next-generation F-150 pickup, as well.