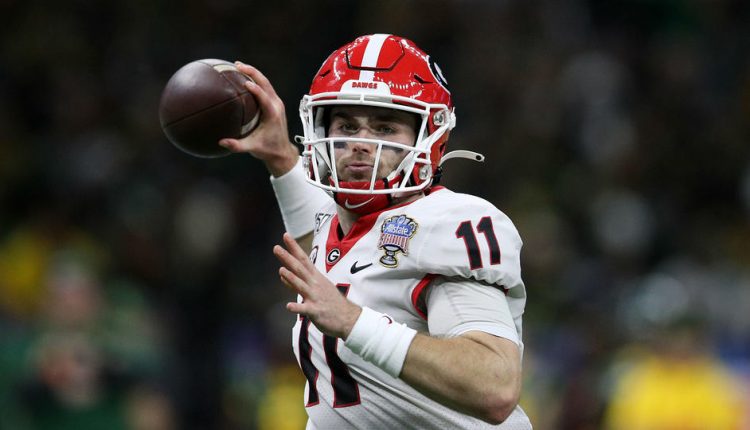 sportingnewsNo. 5 Georgia and No. 8 Baylor concluded the New Year’s 6 slate of games on Wednesday with a defensive slugfest.

For a while it seemed as if Georgia would run away with it after taking a 19-0 lead at halftime, punctuated by two Rodrigo Blankenship field goals and Jake Fromm passing touchdowns to George Pickens and Matt Landers. The Georgia defense was similarly dominant, limiting the Bears to a measly 97 yards of total offense in the first half.

Baylor, to its credit, refused to go down without a fight, scoring 14 third-quarter points behind quarterback Charlier Brewer, including a 12-yard pass to receiver Denzel Mims and a 1-yard touchdown run. But the Bears couldn’t muster another scoring drive; Brewer exited the game in the fourth quarter after a hit to the head, ending any hope Baylor had of mounting a comeback. The Bears’ offense ended the game with a punt, turnover on downs and interception.

In all, Fromm completed 20 of 30 passes for 250 yards and two touchdowns. Georgia’s Zamair White was the leading rusher in the game, notching 92 yards and a score on 18 carries. Pickens had a great game as well, catching 12 passes for 175 yards and a score. Brewer finished 24 of 41 passing for 211 yards, a score and an interception. Receiver Denzel Mims and running back Trestan Ebner led the Bears with 75 and 70 receiving yards, respectively.

12:32 p.m.: INTERCEPTION, BAYLOR. Zeno’s pass is intercepted by Richard LeCounte, who runs perfectly parallel out of bounds and up to the stands. Georgia will kneel on it and end this game.

12:31 p.m.: Baylor now facing fourth-and-10 with no timeouts remaining and 1:51 left. If the Bears don’t convert Georgia can kneel it and end the game.

12:29 p.m.: And now Mims exits the game with what looks like a stinger. One play later Baylor gets a first down at its 22.

12:24 p.m.: Baylor’s defense stands strong and brings on fourth down. Considering the time left on the clock, there might not be enough time for a comeback, especially without Brewer.

12:17 p.m.: TURNOVER ON DOWNS, BAYLOR. Linebacker Nolan Smith sacks Bohanon on fourth down, forcing a turnover on downs. Georgia will get the ball back with great field position and about five minutes left to play. That might be it.

12:14 p.m.: Brewer is being carted off the field, seemingly lucid. An unfortunate reminder of how rough this game is on the players’ bodies.

12:12 p.m.: Good news for Baylor. Brewer is up. But he looks concussed and shouldn’t continue playing.

12:07 p.m.: Brewer scrambles again and gets almost all the yardage needed. But he’s tackled late out of bounds by Georgia’s Travon Walker, netting Baylor 15 yards and a first down. Brewer is still down on the sideline. It’s worth noting he was concussed in the Bears’ Big 12 championship game against Oklahoma.

103 people are talking about this

11:59 p.m.: Wow, Fromm had Demetrius Robertson all alone in the end zone but he underthrew him. Even so the ball dropped right into Robertson’s hands and he dropped it. One play later, Big 12 Defensive Player of the Year James Lynch sacks Fromm for a loss of 3 to make it fourth down.

11:58 p.m.: Fromm hits Pickens on a quick comeback route and he makes several people miss en route to an 11-yard gain to Baylor’s 45. Bears still have no answer for him.

11:57 p.m.: Georgia starting to get several chunk plays along the ground. They’re wearing down on Baylor’s defense.

11:55 p.m.: Fromm hits a wide-open Tyler Simmons on the sideline for a key third-down conversion. Bulldogs get a new set of downs at their 32 and get out from the shadow of their own end zone.

11:53 p.m.: Georgia tries to catch Baylor napping and hit Pickens deep. Baylor doesn’t fall for it and has it well-defended. Second-and-10 for Georgia now.

11:52 p.m.: Brewer’s attempt is knocked down at the line of scrimmage. Baylor punts and downs Georgia at its 1.

11:44 p.m.: Refs award Baylor the first down after review. Bears have it first-and-10 instead of fourth-and-1.

11:41 p.m.: Bears facing fourth-and-1 from their own 45 and are going for it without hesitation (assuming replay doesn’t award them a first down after R.J. Sneed’s catch).

11:27 p.m.: Baylor gets a long gain on a slip screen to Ebner, but an unsportsmanlike penalty negates it. Thankfully for the Bears, a facemask on the play by Georgia still nets them 15 yards to the 31-yard line.

11:22 p.m.: TOUCHDOWN, GEORGIA. One play later, Zamir White takes it in from 13 yards out to make it 26-7 Georgia. Absolutely devastating couple of plays there by Georgia.

16 people are talking about this

Georgia got creative on the field goal attempt, then they scored 6

416 people are talking about this

11:18 p.m.: Georgia, facing third-and-13, gets a chunk of it back with an 11-yard connection between Tyler Simmons to make it fourth-and-2. Blankenship is coming on for a 36-yard field goal.

11:16 p.m.: Georgia running back Kenny McIntosh bounces the ball outside and gets a nice 12-yard gain to the Baylor 27. Bulldogs are starting to impose their will now.

11:13 p.m.: TURNOVER ON DOWNS, BAYLOR. Georgia outside linebacker Azeez Ojulari strip-sacks Brewer from behind and it’s recovered by Peyton Mercer. Georgia has the ball at the Baylor 47.

11:09 p.m.: Baylor’s drive stalls just past midfield, and now the Bears have a choice to make. looks like they’re going for it on fourth-and-4.

11:04 p.m.: And now Baylor forces a three-and-out. Another score here and the Bears are right back in it.

11 p.m.: TOUCHDOWN, BAYLOR. And on the next play, Brewer hits receiver Denzel Mims for a 12-yard touchdown with Eric Stokes in coverage. A huge drive for Baylor that makes it 19-7 Georgia.

10:58 p.m.: Baylor with some success on its first drive out of the half. The Bears are driving all the way down to Georgia’s 13 off eight plays.

10:29 p.m.: Bulldogs get 7 yards on the first-down carry, and that will do it for the first half. Bulldogs go into the locker room leading 19-0.

10:28 p.m.: Georgia will get the ball back, but Baylor downed the Dawgs at the 4-yard line. Probably see a few runs to end the half here.

10:27 p.m.: Georgia forces another punt and will take its last timeout with roughly 40 seconds remaining in the half.

10:24 p.m.: Brewer pumps three times and hits Thornton for the third-down conversion. Next play he spins in the pocket, avoids a blitz and nets 5 yards on the pass. He’s sacked on the ensuing play for a loss of 4 yards, however. Bears face third-and-9 from their 38 with 49 seconds remaining.

10:19 p.m.: TOUCHDOWN, GEORGIA. Fromm hits Matt Landers for a 16-yard touchdown, just his fourth completion to someone other than Pickens. The Bulldogs fail their 2-point conversion, but it’s still 19-0 Georgia.