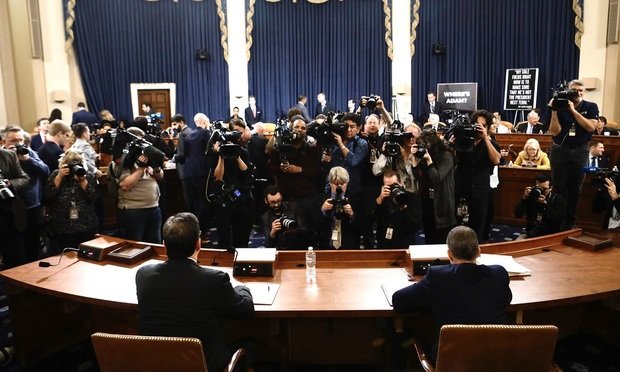 Law House Judiciary Committee counsel Barry Berke made the case for impeaching President Donald Trump on Monday, laying out three offenses that he said are grounds to potentially remove the president from office.

During his 30-minute opening statement, the Kramer Levin Naftalis & Frankel partner argued there are three main examples of “high crimes and misdemeanors” committed by Trump: abuse of power, betrayal of the national interest and corruption of elections.

Berke, along with the House Intelligence Committee’s chief investigator Daniel Goldman and GOP counsel Stephen Castor, appeared before the House Judiciary Committee on Monday to present evidence gathered in the impeachment inquiry.

Berke’s argument focused largely on the conduct by Trump in pushing Ukraine to investigate his political rival, former Vice President Joe Biden, in exchange for releasing military aid to the country. Berke also touched upon conduct from special counsel Robert Mueller’s probe, specifically Trump’s efforts to get then-White House counsel Don McGahn to have Mueller fired and then create a false record over that attempt.

That signals that articles of impeachment against Trump will focus on Ukraine, as it has for much of the inquiry, but reach back to the Mueller probe to establish a larger pattern of conduct by the president.

It’s that pattern of allegedly corrupt behavior that Berke said is reason for the House to impeach Trump, and to do it quickly before the November 2020 election. Berke said it’s possible Trump could attempt to interfere in the presidential election again.

And he pointed to testimony from constitutional law scholar Michael Gerhardt before the committee last week, when Gerhardt said, “If Congress fails to impeach here, then the impeachment process has lost all meaning.”

“If, in fact, President Trump can get away with what he did again, our imagination is the only limit to what President Trump may do next, or what a future president may do next to abuse his or her power to serve his own personal interests over the nations,” Berke said.

Berke’s argument also focused on Trump’s intent, and the president’s reliance on his personal lawyer, Rudy Giuliani, in seeking to enact a personal agenda in Ukraine.

And Berke pushed back against criticism from Republicans that the record is incomplete on impeachment.

“The reason we have not heard from all the witnesses and documents is because President Trump has obstructed the investigation,” Berke said, teeing up obstruction of Congress to be another article of impeachment.

GOP lawmakers argued after Berke’s testimony that he violated House rules by “impugning” Trump’s motives. But House Judiciary Committee Chairman Jerry Nadler rejected the charge, saying that at a hearing about impeaching Trump, “none of us should find it surprising that we are hearing testimony that is critical of the president.”

During his opening statement, Castor argued that Democrats are pursuing an improperly run impeachment inquiry. And he said lawmakers failed to follow proper procedures for subpoenas.

Those are similar to criticisms leveled by White House counsel Pat Cipollone. Both a House Judiciary Committee staff report on impeachment procedures, as well as the House Intelligence Committee’s impeachment inquiry report, have said those arguments lack merit and are not based in fact.

Castor also suggested that when a subpoenaed witness, Charles Kupperman, went to court to contest the demand, Democrats chose not to pursue the case because they “didn’t like the presiding judge,” U.S. District Judge Richard Leon of the District of Columbia.

“Very simply, the evidence of the Democrat’s impeachment inquiry does not support the conclusion that President Trump used his power for his own personal political path,” Castor said.