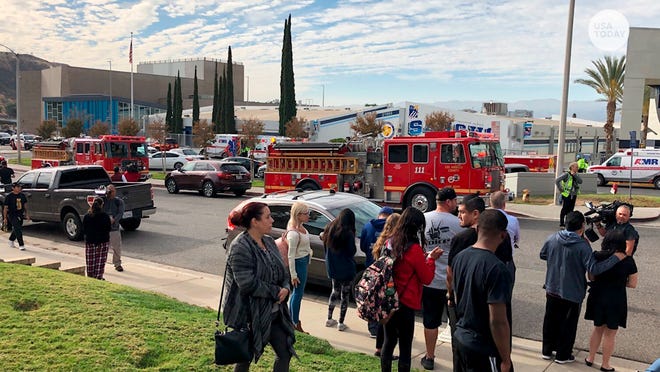 The suspect shot himself in the head with his last bullet during the 16-second attack on Thursday morning, said Los Angeles County Sheriff Alex Villanueva, and was in “grave” condition, according to law enforcement officials.

The incident was the 30th shooting attack at a school this year, according to the gun safety group Everytown.

Here’s what we know so far:

What happened at Saugus High School?

A gunman pulled a weapon out of his backpack around 7:30 a.m. local time and opened fire at the school, which has a student population of about 2,500 in grades 9-12.

He shot five students in the quad area with a 45-caliber semi-automatic handgun before shooting himself, said Capt. Kent Wegener of the Los Angeles County Sheriff’s Office.

Saugus and all other schools in the district went on lockdown as police swarmed the area. Once students were allowed to reunite with their parents, families were seen embracing and crying.

Who is the suspect?

Officials described the suspect as an Asian male student at the school whose 16th birthday was Thursday.

Neighbors and classmates described the boy as pleasant but noted that he was changed by the death of his father two years ago. Classmates have identified the boy to USA TODAY, although law enforcement has yet to name him.

The suspect was a quiet, normal student, said Brooke Risley, a 16-year-old junior. He ran cross country and was a Boy Scout.

“He doesn’t seem like the kind of kid to do this,” Risley said.

Though the teen was sometimes a little sad, next-door neighbor Jared Axen said he didn’t come off as depressed.

His father died from a heart attack in December 2017, according to an obituary. Although his father had owned guns, Axen, 33, said he didn’t think the boy viewed them in an unhealthy way.

Who are the victims?

Two of the injured are in good condition and the third is in fair condition, according to officials at Henry Mayo Newhall Hospital and Providence Holy Cross Medical Center.

Other than attending the same school, Wegener said law enforcement officials have not found a relationship between the shooter and the victims.

How did the suspect get a gun?

Law enforcement officials have not shared any information about how the suspected shooter obtained the gun used in Thursday’s assault. The 16-year-old couldn’t have legally bought it himself: In California, licensed dealers cannot sell a firearm to anyone under age 21.

Were there any warning signs?

Police are investigating reports of social media postings that may have been made by the suspect, Wegener said, including an Instagram account that included the message: “Saugus, have fun at school tomorrow.”

That account did not belong to the suspect, Buzzfeed News was first to report on Thursday night, detailing that the user later declared his postings to be a joke.

Get the News Alerts newsletter in your inbox.

Get alerted to the latest stories to stay on top of the news.

“We disabled this account for violating our policies,” an Instagram spokesperson confirmed to USA TODAY via email. “We can confirm it did not belong to the shooter.”

Investigators were working Thursday night to obtain a search warrant to learn about the owner of the Instagram account, Wegener told BuzzFeed News.

School shootings:There have already been at least 30 resulting in death or injury in 2019

Wegener said his department looked into recent threats against Saugus High and identified two, both of which were investigated and deemed to be unrelated to Thursday’s shooting. Authorities have not determined a motive but don’t believe he was acting on any ideology.

What safety measures were in place?

The school district website says a resource officer is assigned to every campus, and the schools have fencing and supervisors monitoring who goes in and out. The Saugus High campus is fenced and has a dozen security cameras but no metal detectors.

“The gates to the campuses are locked during instructional time and typically only unlocked when students are leaving campus for lunch or leaving school at the end of the day. Visitors are directed to the office to check-in.”