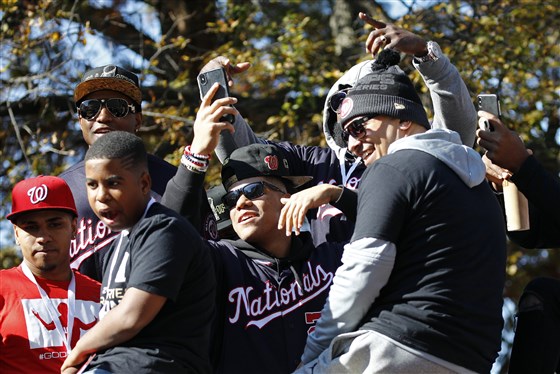 NbcnewsThousands of Nationals’ fans lined the streets of Washington, D.C., for a parade celebrating the franchise’s first-ever World Series win, which the team clinched Wednesday in a thrilling Game 7.

Most players were to participate in the parade, which is to be followed by a visit to the White House hosted by President Donald Trump on Monday.

For that event, at least one player, Nationals pitcher Sean Doolittle, has said he will not be going to the White House.

Doolittle said in an interview on Friday that President Trump’s rhetoric played a key role in his decision.

“There’s a lot of things, policies that I disagree with, but at the end of the day, it has more to do with the divisive rhetoric and the enabling of conspiracy theories and widening the divide in this country,” Doolittle told The Washington Post.

Doolittle also cited his wife’s two mothers’ being active members of the LGBTQ community as well as his brother-in-law’s autism as reasons he would not attend.

“I have a brother-in-law who has autism, and (Trump) is a guy that mocked a disabled reporter,” Doolittle said in the interview. “How would I explain that to him that I hung out with somebody who mocked the way that he talked, or the way that he moves his hands? I can’t get past that stuff.”

The pitcher was referring to Trump’s contorting his arms during a campaign speech in November 2015 in an apparent imitation of reporter Serge Kovaleski, who suffers from arthrogryposis. Trump later defended his behavior, claiming he was not familiar with Kovaleski’s appearance and was not aware of his condition.

Some other professional athletes who have won championships have previously chosen not to visit the White House under the current president. Trump cancelled a visit from the Philadelphia Eagles last year after members of the team said they planned to boycott the event. And in 2017, the president rescinded an invitation to the Golden State Warriors’ Stephen Curry following a backlash to Trump’s criticism of NFL players who refused to stand during the National Anthem.