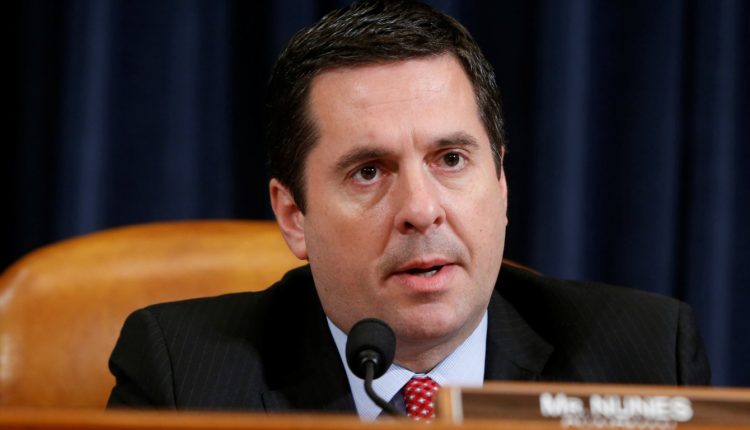 Rep. Devin Nunes left everyone baffled by claiming that Democrats wanted ‘nude pictures’ of Trump during a House Intelligence hearing

Rep. Devin Nunes, the ranking member of the House Intelligence Committee, left everyone baffled when he said at a Thursday hearing that Democrats wanted “nude pictures” of President Donald Trump.

At the hearing, the acting director of national intelligence, Joseph Maguire, discussed a whistleblower complaint from an official in the intelligence community.

The complaint, released to the public on Thursday morning, detailed concerns that in a July phone call with Ukrainian President Volodymyr Zelensky, Trump undermined national security by pressuring the Ukrainian government to investigate the son of former Vice President Joe Biden after withholding a nearly $400 million military-aid package.

Trump, his personal attorney Rudy Giuliani, and a White House memo of the call released on Wednesday have confirmed many of the details in the complaint.

The memo shows that Trump said on the call: “We do a lot for Ukraine. We spend a lot of effort and a lot of time. Much more than the European countries are doing.” He then encouraged Zelensky to investigate the Bidens.

Nunes has been one of Trump’s staunchest defenders on Capitol Hill amid both the special counsel Robert Mueller’s investigation into Russian interference in the 2016 election and the latest allegations that Trump compromised national security.

A Ukrainian official “was a source for Nellie Ohr, wife of Department of Justice official Bruce Ohr, as she worked on the anti-Trump operation conducted by Fusion GPS and funded by the Democrats,” Nunes said, presumably referring to the so-called Steele dossier, a large report about Trump funded by the opposition-research firm Fusion GPS.

“And of course, Democrats on this very committee negotiated with people who they thought were Ukrainians in order to obtain nude pictures of Trump,” Nunes continued, not clarifying what nude pictures or which committee members he was talking about.

In 2018, The Atlantic reported that two Russian pranksters posing as members of Ukraine’s parliament prank-called House Intelligence Committee chairman Rep. Adam Schiff claiming to have “pictures of naked Trump” from a purported encounter Trump had with a famous Russian woman.

While Schiff said on the call that the information was “helpful,” his staff told The Atlantic in a statement that they had alerted law enforcement before and after the call that it was “probably bogus.”