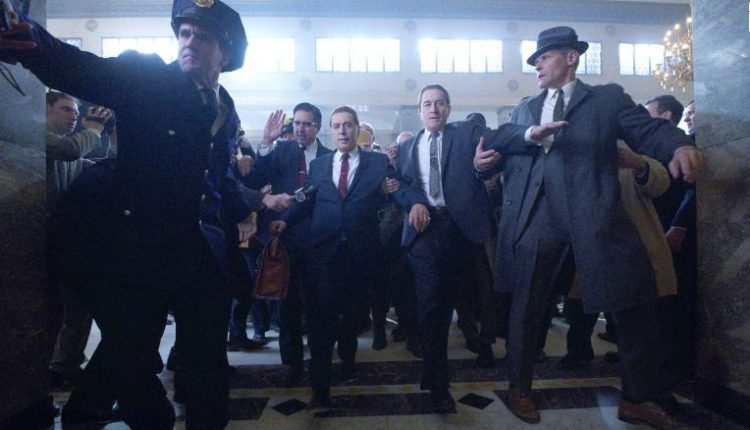 ‘The Irishman’ official trailer is mobbed up with Robert De Niro, Joe Pesci and Al Pacino

(CNN)If the Academy Awards cast a mob movie, it would probably look a lot like “The Irishman.”

It stars Oscar winners Robert De Niro, Al Pacino and Joe Pesci and is directed by Martin Scorsese, who has picked up a few of the trophies himself.
The official trailer has dropped and expands on the teaser trailer released in July.
De Niro stars as mob hitman Frank Sheeran who becomes entangled in the disappearance of labor leader Jimmy Hoffa, played by Pacino.
Pesci portrays crime boss Russell Bufalino.
In the new trailer Sheeran is seen being questioned by his attorney Bill Bufalino, played by Ray Romano, which allows for some flashbacks on his murderous deeds.
The action takes off from there in this star studded cast which also includes Harvey Keitel, Anna Paquin and Bobby Cannavale.
The Netflix film reunites director Scorsese with frequent collaborators De Niro and Pesci who have all worked together on various projects, including the iconic mob film “Goodfellas.”
“The Irishman” is based on the 2004 memoir “I Heard You Paint Houses” by Charles Brandt and will debut on Netflix on November 27.
أكمل القراءة
The Irishman Trailer
24
شارك FacebookTwitterGoogle+ReddItWhatsAppPinterestالبريد الإلكترونيTumblrTelegramطباعة
قد يعجبك ايضا
Entertainment