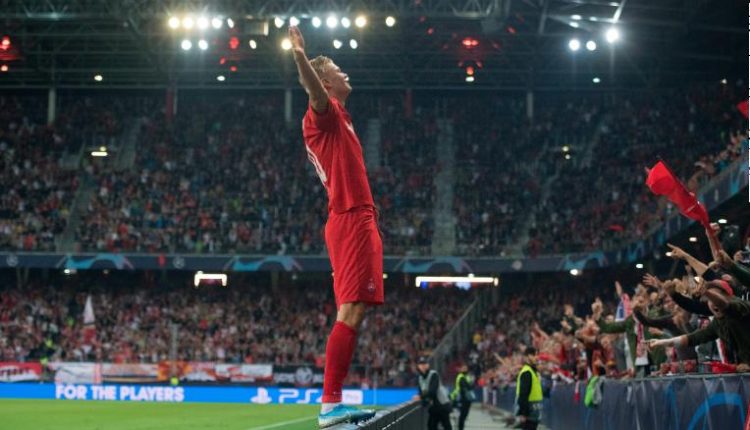 (CNN)Erling Braut Håland received a standing ovation from the Red Bull Salzburg fans after scoring a first-half hat-trick on his UEFA Champions League debut Tuesday, where he became the third youngest player to score a Champions League treble — behind only Raul and Wayne Rooney.

The 19-year-old’s heroics helped Salzburg thrash Belgian side Genk 6-2 in their group-stage opener and sees his electrifying start to the new season continue.
Prior to Tuesday’s match, Håland had scored 17 times in nine appearances for the Austrian side and his latest hat-trick is his fourth treble of the season.
It comes after a summer in which he scored nine goals in a single game for Norway, as his national side beat Honduras 12-0 at the Fifa Under-20 World Cup in Poland.
It appears such form has Håland’s teammates buying into the hype surrounding the youngster who has emerged as a potential superstar for the future.
“He is phenomenal. With his height, to be so nimble and have such command of the ball,” Maximilian Wöber said after the 6-2 victory.
“It’s really hard to play against him in training, you just have to foul him.
“Once again, he proved why he’s definitely going to become one of the best strikers in the world.”

Runs in the family

There’s a good reason you might recognize the surname ‘Håland’ — he is the son of former Nottingham Forest, Leeds and Manchester City defender Alf-Inge Håland, who played soccer in England for over a decade.
The Salzburg striker was born in Leeds during his father’s spell with the Yorkshire club but spent his early footballing career at Norwegian side Bryne before moving to Molde, where he was managed by current Manchester United boss Ole Gunnar Solskjær.
He moved to Salzburg in Austria in January 2019, and started the new season in red hot form, scoring a hat-trick in his first game of the season — a 7-1 Austrian Cup win against SC-ESV Parndorf –and in his fourth game — a 5-2 Austrian league win against Wolfsberger.
Håland became the first teenager to score more than once on his Champions League debut since Rooney scored a hat-trick against Fenerbahce in September 2004 and his ability to consistently raise his game has impressed his teammates.
“His goalscoring run is incredible,” Salzburg midfielder Zlatko Junuzović said after the win over Genk.
“I’m so happy he scored three today. People said: ‘okay he’s scoring for fun in the league but wait until he comes to the big stage’. Then he goes and scores another hat-trick!”

When asked to describe Håland in three words, Salzburg’s American coach Kesse Marsch said: “Positive, energetic, electrifying. Or maybe electrifying!”
Although the Norwegian is 1.94m-tall and possesses all the physical attributes to take him to the top of the game, it his character that suggests Håland is destined for great things.
“He works hard and takes nothing for granted,” Marsch told UEFA.com. “Of course, he’s talented, but when you combine it with his personality, that’s what makes him really special. He’s only going to get better.”
Visit CNN.com/sport for more news, features, and videos
As for Håland himself — who became the eighth player to score a hat-trick on his Champions League debut — he is hoping Salzburg can emulate Ajax’s remarkable run to the Champions League semifinals last season.
“Everything is possible. We all saw Ajax last year; it would be nice to be the new Ajax,” he told UEFA.com. “We know there are lots of good teams and that it will be hard, but everything is possible.”
أكمل القراءة
Håland scores hat-trick on Champions League
119
شارك FacebookTwitterGoogle+ReddItWhatsAppPinterestالبريد الإلكترونيTumblrTelegramطباعة
قد يعجبك ايضا
Home